The Terrorism Risk Insurance Act (TRIA) is part of a federal plan for economic continuity and recovery after a severe terrorist attack on the United States.  Enacted following the September 11th attacks, the plan rapidly stabilized the insurance market and broke through the paralysis that plagued the economy, particularly in construction, real estate, finance and other vital sectors.

TRIA requires insurers to offer coverage for terrorism to policyholders in certain commercial insurance lines. Policyholders are free to accept or reject the offer, but terrorism coverage may not be excluded in these lines unless the policyholder has had the opportunity to purchase such coverage on the same terms, amounts, and limitations applicable to other perils

The plan applies to an act of terrorism (certified by Treasury Secretary) occurring within the United States (including its territorial sea and continental shelf), as well as at any U.S. mission abroad or to any U.S. flag vessel or U.S. aircraft wherever located.

Under TRIA, all insurance against terrorism risk is written in the private marketplace with no upfront federal liability.  Private insurers assess and price risk, service the policies, and adjust and pay claims; retaining much of the risk.

The commercial policyholders pay the premium for terrorism coverage and retain any individual policy deductibles as applicable.  If there are any federal payments, commercial policyholders will be responsible for repaying such assistance through a policy surcharge, up to certain mandatory amounts, as well as additional discretionary amounts determined by the Treasury Secretary. Finally, any aggregate losses beyond $100 billion will be borne entirely by policyholders.

Through TRIA, the federal government provides confidence to the private market that terrorism losses will not paralyze economic activity. At the same time, Washington’s emergency support is reasonable and contains limitations to avoid tipping the balance to overburden taxpayers.

No federal assistance will be provided at all unless the act of terrorism results in at least $100 million in aggregate insured losses (this is called the “program trigger”).  Even then, federal assistance is provided — which in all but the most severe cases amounts to bridge liquidity — only if an insurer has paid out losses in excess of its “insurer deductible,” and then only 85% of losses above that deductible amount.  Because the deductible is a considerable percentage of each insurer’s overall business (which has grown since 2002), any federal assistance is now limited to severe, catastrophic acts of terrorism. In any event, all losses recognized in the TRIA plan go first through the private insurance mechanism where much of the loss is retained by design. In absence of TRIA, which ensures industry participation, the federal share of such a disaster could be much larger.

For terrorist events that result in aggregate losses up to $27.5 billion, any federal assistance paid out under the TRIA plan must be recouped over time through a surcharge on all commercial policies in covered lines.  For any truly catastrophic event that exceeds that figure, federal assistance may still be recouped, at the discretion of the Treasury Secretary. These standards protect taxpayers in the event of a truly catastrophic act of terror.

TRIA limits liability of insurers and the federal government to aggregate insured losses of $100 billion. Risk of loss above that aggregate shifts back to policyholders irrespective of coverage limits.

For events exceeding the “Program Trigger” ($100 million in aggregate losses): 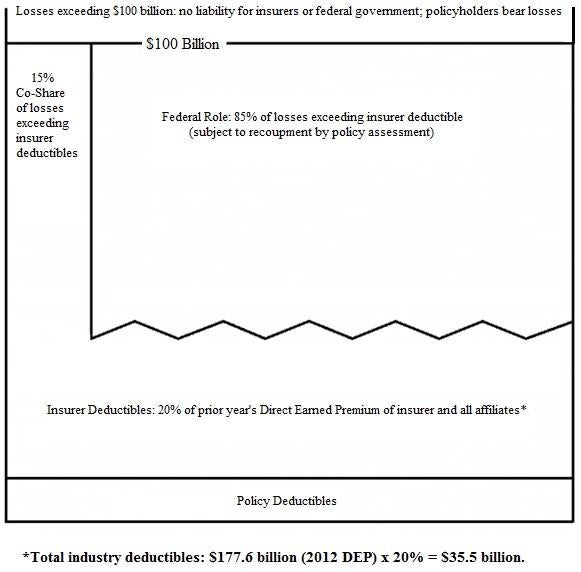